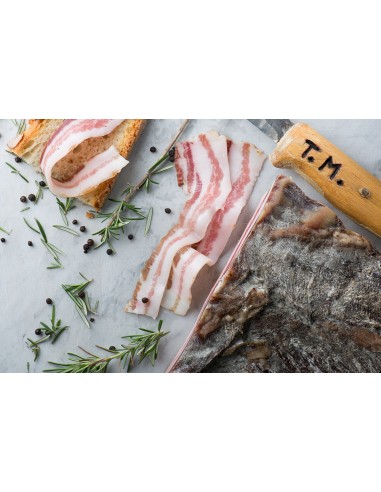 The stretched bacon of Salumificio Tornillo is produced without added preservatives, it is processed manually with meats coming exclusively from native pigs, grown with natural feed and not intensively reared.

The stretched bacon of Salumificio Tornillo is produced without added preservatives, it is processed manually with meats coming exclusively from native pigs, grown with natural feed and not intensively reared.

Size: various (being an artisan product) from 2.5kg. to 4kg.

IT DOES NOT CONTAIN GLUTEN, NOR LACTOSE.

... It was October 1957 when Michele was born, the second son of a peasant family who, with many sacrifices, starting from scratch, worked and lived in the countryside.

My grandfather, Mario, (actually in the MARINO registry due to a transcription mistake) cultivated the cereals that were used to raise the cattle that were sold directly, in the many fairs in the area.

While, with the economic recovery, after the Second World War, the cattle were sold on the farm to the BUTCHER OF THE COUNTRY.

This figure who was most frequently seen in the company inspired my father to want to do this job, because he considered it essential to be able to get those genuine products to those interested.

He begins to make the first experiences outside of him and then returns and works at the butcher's shop of a farmers' cooperative, while at the end of the 70's he opened his first butcher's shop.

In 1980, with my mother, they built the foundations for our family, which already grew in 1981 with the birth of my brother Mario and then I too arrived in 1983.

In 2009 we inaugurate the new laboratory for the processing and aging of pork and beef.

Today after 40 years, with some white hair, my father continues to buy animals from his small (understood as the size of the company) trusted breeders to then slaughter, process and sell them directly without intermediaries, a sort of KM O CHAIN.

My brother and I have never decided to do this job, because for us there is no other job. Our parents, without realizing it, made us love him.

A tradition made of authenticity, simplicity and true flavors: like Tornillo cured meats.

Our cured meat factory is the result of the commitment and cultural heritage accumulated by our family over decades of experience.

Our work has always been characterized by the laborious search for the perfect balance between preservation and enhancement of ancient methods and innovation of production techniques.

We pay great attention to the maturing and refining phases, we are particularly passionate about these two moments, and we dedicate great effort to infuse the aromas, scents and flavors of the past into the cured meats.